"Reserved for members of the First Order’s elite Special Forces, the TIE/sf is a two-seater variant of the TIE/fo. Equipped with both deflector shield and hyperdrive, a twin laser turret adds extra firepower, rounding out a highly capable starfighter."
— In-game description

The TIE/sf, also referred to as the Special Forces TIE Fighter, is a class of starfighter in DICE's Star Wars Battlefront II. It is the Interceptor class for the First Order and the counterpart to the RZ-2 A-Wing.

The TIE/sf Fighter excels at hunting down and engaging other starfighters. As an interceptor, it makes use of its impressive speed and maneuverability in order to close in on its enemies and to shake off pursuers.

The Afterburner ability grants a speed boost to the TIE/sf Fighter, and can be used in order to break missile locks and to shake pursuers.

With the Turret Gunner ability, the TIE/sf Fighter can keep itself protected and dissuade pursuers by having the gunner automatically fire on enemies following the ship. The gunner is powerful enough to destroy enemy ships on its own if enemies do not break off their pursuit.

The Concussion Missile ability allows the TIE/sf Fighter to briefly disorient enemy starfighters it hits, along with being able to blind soldiers on the ground that are near the explosion. While not as powerful as torpedoes from the Fighter or Bomber, the Concussion Missile is still capable of finishing off weakened targets. 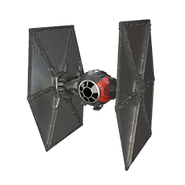 In-game icon for the TIE/sf in Star Wars Battlefront II.
Community content is available under CC-BY-SA unless otherwise noted.
Advertisement