The TIE Bomber is the bomber-class ship for the Galactic Empire. It is heavily armoured, yet less so than a transport. This ship can hold two passengers so a second player operates the guided rockets, or fire proton torpedoes. It has high damage, perfect for taking out the various critical points on the enemy's capital ships. This is handy for getting points quickly, but these ships are basically useless for destroying other starships. These guys will definitely be in demand, and are one of the more useful ships in the game. Other equivalents of the TIE Bomber for the other three playable factions include: the V-Wing, CIS Strike Bomber, and Y-Wing.

A TIE Bomber on Bespin.

This pilot must have met a black mynock. 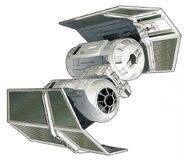 TIE Bomber.
Add a photo to this gallery

Retrieved from "https://battlefront.fandom.com/wiki/TIE_Bomber?oldid=88742"
Community content is available under CC-BY-SA unless otherwise noted.