The TIE/D Defender was a high-performance TIE series starfighter developed for the Imperial Navy by Sienar Fleet Systems shortly before the Battle of Hoth. Representing a shift in starfighter design from previous TIE models, the ship featured a hyperdrive as well as deflector shields to allow it to operate independent of Imperial capital ships. The ship's speed and agility, combined with its firepower, made it arguably the most advanced starfighter available at the time. This ship is a great tool, however it didn't make the first two games, because the ships took up to much space in an already overcrowded game. It was later added into the Star Wars: Battlefront: Elite Squadron and Star Wars: Battlefront: Renegade Squadron games as a Imperial escort. This ship is also incredibly popular in Space Mods. 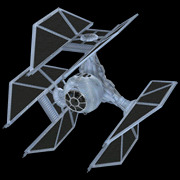 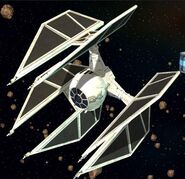 A TIE/D Defender.
Add a photo to this gallery

Retrieved from "https://battlefront.fandom.com/wiki/TIE_Defender/Original?oldid=87618"
Community content is available under CC-BY-SA unless otherwise noted.