The TIE Interceptor is the interceptor starfighter for the Galactic Empire. It is specifically built for tracking and destroying enemy ships. They are very agile, but require quite a bit of skill to handle correctly. If you can, you will quickly become a nuisance to the enemy, taking out ships quickly and skillfully almost before the enemy player realizes he is being attacked. This is very handy for accumulating the points you cannot get from only taking out the critical points of the enemy capital ship. However, they sacrifice nearly all armor in order to gain maximum speed and one shot from a Y-wing will send it spiraling away to a fiery doom. There are always many of these ships present in any game in space. (Equivalent- Republic Interceptor, Droid Tri-Fighter, A-Wing).

TIE Interceptors are one of the best interceptors in game, due to their speed, small profile, fast firing guns, and missiles with an instant lock on.

A TIE Interceptor in a Hanger. 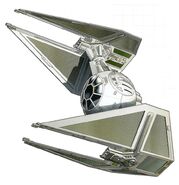 A TIE Interceptor.
Add a photo to this gallery

Retrieved from "https://battlefront.fandom.com/wiki/TIE_Interceptor?oldid=87799"
Community content is available under CC-BY-SA unless otherwise noted.