The TIE Striker is an Imperial starfighter featured in the Rogue One: Scarif expansion pack of DICE's Star Wars Battlefront as a Power Up that can be summoned by Imperial soldiers, similar to the Viper Probe Droid.

When collected, a TIE Striker appears in the sky, making strafing runs on nearby Rebel soldiers, similar to the AI TIE Fighters in the offline gamemode Skirmish. It is collected through a random Power Up, not by a specifically designed coin, such as a vehicle or hero pick-up.

The TIE Striker is only available on Scarif maps. 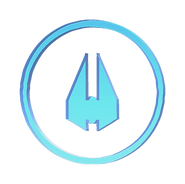 Unused power up design
Add a photo to this gallery
Retrieved from "https://battlefront.fandom.com/wiki/TIE_Striker?oldid=87621"
Community content is available under CC-BY-SA unless otherwise noted.