"The TX-130 Saber-class fighter tank was a maneuverable, fast-attack vehicle used by select battalions in the Grand Army of the Republic"
— In-game description

The TX-130 Saber-class fighting tank, or simply the TX-130 Fighter Tank or TX-130, is a ground Armor Reinforcement vehicle for the Galactic Republic in DICE's Star Wars Battlefront II. It was released on June 26 as part of the Where are those Droidekas? Update.[1]

The armored TX-130 tank balances agility with power; it is both quick and defensive, allowing it to strike at enemies with its laser cannons and then fall back. Although the laser cannons can only shoot in a straight horizontal line of fire, the TX-130 is maneuverable, allowing it to swing around to shoot at enemy players around it. 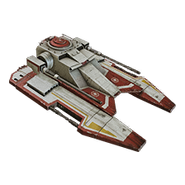 Promotional image featuring the Separatist Droideka and the TX-130.