The following is a list of maps that are set on Takodana, along with the game modes that can be played on them:

Promotional image of a skirmish on Takodana. 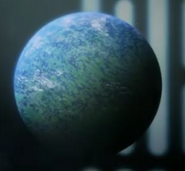