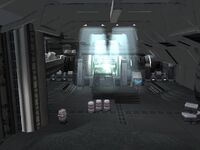 Tantive IV is a diplomatic Corellian Corvette used by Alderaanian Princess Leia Organa. The ship would eventually be captured and destroyed by Imperial forces in an attempt to find the Death Star plans. This is one of the only two maps in Battlefront 2 that's considered a ground map, but isn't an actual planet.

The map features many key section of the ship, including the bridge, escape pod bay, and the reactor room, all connected by a network of corridors. Some of these are iconic areas in Episode 4, such as the room where Leia gives R2-D2 the plans, the corridor where the Imperials boarded, the escape pod bay where the droids escaped, and a little inlet that represented the interior of a TIE boarding shuttle.

In the small hallways of the map, there are many different weapons you can use to win the battle by taking advantage of the multiple chokepoints.

The engineers are very important in the battle. Their shotgun can cause damage to the enemy as the fusion cutter can repair the ammo and health droids which have been destroyed by grenades.

Retrieved from "https://battlefront.fandom.com/wiki/Tantive_IV:_Interior?oldid=90263"
Community content is available under CC-BY-SA unless otherwise noted.