watch 04:21
Wiki Targeted (Games)
Do you like this video?
Play Sound

Tatooine maps in Star Wars Battlefront explore the planet's natural environments—from its rocky canyons, to its sandy dunes—and several of the remote outposts established by the Rebel Alliance on the Outer Rim world. The maps also explore Tatooine's outskirts, such as a Jawa haven and a Tusken Raider camp.

The following maps are set on Tatooine and the game modes they are available:

Tatooine is featured again in Star Wars Battlefront II, this time exploring Mos Eisley, the red light haven for smugglers and criminals alike. The Mos Eisley Cantina ─ which famously featured in A New Hope ─ is featured as its centre point. Many domesticated animals and civilians can be seen in its streets, with the smaller buildings in the area creating a dynamic between rooftop and ground-level battle.

The Han Solo Season Update marked the return of Jabba's Palace from the first game. 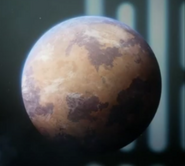 Boba Fett using his jetpack to soar over a battle in Judland Wastes.

An Imperial Star Destroyer looming over the horizon in Raider Camp.

A Rebel soldier uses a Smart Rocket in Jawa Refuge.
Add a photo to this gallery

Retrieved from "https://battlefront.fandom.com/wiki/Tatooine?oldid=100544"
Community content is available under CC-BY-SA unless otherwise noted.