A Desert World in the Outer Rim. Home to Humans, timid Jawas, and the fearsome Tusken Raiders. Tatooine has several cities such as Mos Eisley and Anchorhead. The map itself takes place in the Dune Sea. Several locations such as The Lars Homestead, a Sandcrawler, and even a Tusken Village can be visited.

Tatooine: Dune Sea is available only for Star Wars Battlefront. The Dune Sea map has a lot of open ground, great for vehicles to blast away at infantry. There are also two command posts that are controlled by Tusken Raiders which could give you a tactical advantage if you take them early on in the battle. You should also watch out for the Sarlacc Pit since it can eat you if you travel near it. It is also dangerous to fly starships because there are many buttes and enemy aircraft you may crash into.

Involvement in the film(s):This is where Luke Skywalker lived with his Aunt and Uncle. Also was featured on Return of the Jedi, and is the Homeworld of Luke's father, Anakin(AKA Darth Vader.) Is briefly shown on Attack of the Clones and is mentioned on Revenge of the Sith and The Empire strikes back. It is also where Jabba's palace resides in.

Empire: The Empire is a better choice for this map. You're best to get some allies into a Sand Skiff go behind the Tusken Village CP then capture it providing you with high ground from which your forces can attack the Rebels' main CP. You will be harassed a bit by Tuskens from their lower CP, but they are easly repelled due to your high ground. Also, the Sarlacc will help protect you from them.

Rebels: You will face more trouble from the Tuskens than the Empire will, and attacking their CPs from your side is more difficult. A brute force attack on the Empire's main CP from the homestead my be the best shot, if for no other reason than to cut off the Empire's supply of heavy machinery. This may also force the Empire to try to take over the Tusken CPs to protect their reinforcements.

A Tusken Raider prepares to take on an enemy 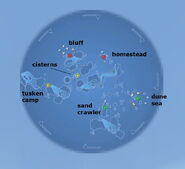 This is the overview map for Tatooine: Dune Sea 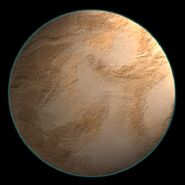 The Sarlacc pit, located in the center of the map 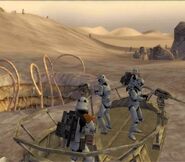 This the Sand Skiff, a vehicle that is unique to Tatooine: Dune Sea
Add a photo to this gallery

Retrieved from "https://battlefront.fandom.com/wiki/Tatooine:_Dune_Sea?oldid=94029"
Community content is available under CC-BY-SA unless otherwise noted.