Jundland Wastes is a multiplayer and Skirmish map featured in Star Wars Battlefront. It is playable in Walker Assault, Supremacy, Fighter Squadron, and Turning Point. Defining features of the map include its desert like features including sandstone and dunes. When played on Walker Assault, after a certain point, the two AT-ATs split up onto different paths. This map also includes a Rebel base where a GR-75 Medium Transport docks.

One of these uplinks is located next to a dormant Sand Crawler. This uplink is the hardest to take on the Imperial side because Rebels spawn closer to this uplink than it's partner. The adjacent uplink is located in an abandoned Tusken Raider village. All of the Tusken Raider dwellings are fully destroyable except for the bases of their poles. This uplink is fair distance from the Rebel's spawn point, so it is more difficult to hold this uplink as the Alliance.

The first of these two uplinks is located in the interior of an Alliance building that is embedded into the side of rocky hill which can traversed. This uplink is easy to control as long as the Alliance has a foothold on the uplink before the Imperials can reach it. It is worth noting that there is a DF-9 Turret located outside the entrance to the building's corridor. This turret is useful for the Rebels as long as there is a firing squad around the turret to protect it. Just inside the corridor is an E-Web blaster which is useful if the Rebels are pushed back inside. This uplink's partner is located outside the Rebellion building across a middle section where the AT-ATs eventually cross. This uplink is centered in an area of the map that is hard for ground vehicles to traverse, making this section of the map a CQC area. Expect brutal fighting in the entire area of this map, which is studded with narrow walkways surrounded by rocky outcroppings which can be traversed.

These two uplinks are located in a Rebel base that slightly resembles the interiors of Outpost Beta, if it were blown through by a sandstorm. One of these uplinks is located in a crowded loading dock of the base, behind a GR-75 transport, which can be jumpacked on and used for sniping. Beware of campers in the dark corners surrounding this uplink. The opposing uplink is located in another section of the base at the convergence of three cramped, tight corridors where there is bound to be heavy blaster fire as well as explosions. Heroes like to sit in these corridors, so take caution if attacking or defending this uplink. Excluding the areas where the uplinks are located, or under the GR-75, the base can be easily bombarded with Orbital Strikes.

Fighter Squadron is on a different part of the map with lots of hills. The health, and hero pick ups are split in numerous areas, some of them hiding behind the canyons and requiring the player to leave the battle to pick them up. Some of them are even crammed inside difficult to enter spots. 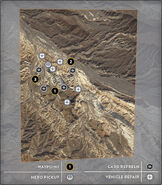 Jundland Wastes in Fighter Squadron.
Add a photo to this gallery

Retrieved from "https://battlefront.fandom.com/wiki/Tatooine:_Jundland_Wastes?oldid=87636"
Community content is available under CC-BY-SA unless otherwise noted.