The Trade Federation Cruiser, formally known as the Providence-class carrier/destroyer, is a CIS starship featured in Star Wars: Battlefront II and its handheld successors. It serves as the flagship of a Separatist task-force in all major CIS space engagements in Battlefront II and Battlefront: Renegade Squadron. It features one large hangar with two exits, one on the port side of the vessel, the other on the starboard side. From this one hangar spawns the Separatist starfighters for the engagement - Droid Tri-Fighters, CIS Strike Bombers, and Vulture Droids.

Bridge
Add a photo to this gallery 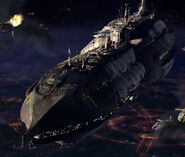 Retrieved from "https://battlefront.fandom.com/wiki/Trade_Federation_Cruiser?oldid=87845"
Community content is available under CC-BY-SA unless otherwise noted.