The U-Wing was added to the game in the Rogue One: Scarif expansion pack.

Unlike other vehicles, the only time players can directly pilot the U-Wing is in the first stage of Infiltration. In all other scenarios, players can only become the U-Wing gunner above Scarif.

In the space portion of Infiltration, players are randomly selected to be the U-Wing. Here, the U-Wing has three defensive abilities: shield, speed boost, and sensor jammer. Using these in tandem will allow the player to successfully navigate to the Shield Gate at the end of the map. Offensively, the U-Wing is armed with a pair of front forward-facing blaster cannons to deal with enemy fighters.

On the ground, the player's time as the U-Wing gunner is determined by the player's ability to look for and kill enemies, much like piloting the Imperial AT-AT. Killing enemies adds to the time in the gunship. As the gunner, the player also has two abilities to help increase survivability: a shield and sensor jammer. Unlike the AT-AT, it is possible to be killed while still in the U-Wing: either if the gunship itself is destroyed or the player in the gunship's exposed interior is sniped with a long-range weapon, like the Cycler Rifle or Pulse Cannon.

The U-Wing gunship also features trait levels. Each trait increases the amount of armor and damage the ship does. Attaining even trait level 2 is quite rare, as it requires a large killstreak to do so.

Accelerates ship to max speed for short period of time.

"A sturdy gunship used by the Rebel Alliance, the U-wing starfighter is a well-armed swing-wing vessel that can fly air support during dangerous missions against the Empire."
— In-game description

The U-Wing returns in Star Wars Battlefront II as an Artillery vehicle for the Rebel Alliance, although only available on Yavin IV for one phase.

The U-Wing costs 400 Battle Points to use. Players take the gunner position, and have a limited time window to operate the U-Wing. As of the progression update, it is only playable under the Galactic Assault gamemode on Yavin 4. Unlike Star Wars Battlefront (DICE), The gunship is no longer allowed to be piloted, unlike starfighters.

The U-Wing is playable on the following maps: 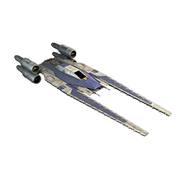 In-game icon for the U-Wing in Star Wars Battlefront II.
Community content is available under CC-BY-SA unless otherwise noted.
Advertisement