"Also known as the Alpha-3 Nimbus-class V-wing, this fighter is small, fast and agile. A highly effective interceptor, it excels in dogfighting."
— In-game description

The V-Wing, also known as the Alpha-3 Nimbus, is a Galactic Republic starfighter that can be piloted in DICE's Star Wars Battlefront II. It is the Interceptor class for the Galactic Republic.

The V-Wing excels at hunting down and engaging other starfighters. As an interceptor, it makes use of its impressive speed and maneuverability in order to close in on its enemies and to shake off pursuers.

The Afterburner ability grants a speed boost to the V-Wing, and can be used in order to break missile locks and to shake pursuers.

With the Laser Barrage ability, the V-Wing can unleash a devastating burst of high damage against anything unfortunate enough to be hit by all the blasts. This ability can also be used to damage objectives, or to harass enemy Hero Starfighters.

The Heat Sink ability allows the V-Wing to keep firing without having its weapons overheat, and can be used in order to keep the pressure on an opponent and to tear through anything in its path.

Promotional image of the V-Wing. 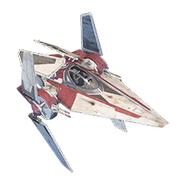 In-game icon for the V-Wing. 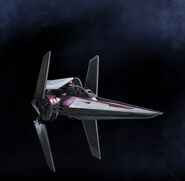