The V-Wing, or Apha-3 Nimbus-Class V-wing starfighter is the bomber class ship for the Galactic Republic. It has quite a bit of health for a single-man craft. Its bombs are excellent for both dive bombing and horizontal bombing, and is good for taking out the various critical points on the enemy's flagship. This is handy for getting points quickly. In close range, the Shock Cannon is excellent for taking out enemy starfighters, particularly Droid Starfighters. They are better at destroying enemy craft than some other bombers. These starfighter will definitely be in demand, especially in the small space battles, as they are one of the more useful ships in the game. This ship is also very agile for a bomber, and can be used to dogfight with and escape from even Droid Tri-Fighters. (Equivalent- TIE Bomber, CIS Strike Bomber, Y-Wing).

The V-wing is part of the bomber class. Their specialty rests in destroying turrets, breaking through shields, and destroying mission objectives. Equipped with proton bombs, the V-wing needs to get relatively close to its target to cause the desired damage. This means the V-wing needs to go deep into enemy territory, which is dangerous given its slower speeds and limited energy supply. This is sacrificed for greater hull strength, the hallmark of all bombers. Luckily, the V-wing has an increased base speed (compared with other bombers) and is equipped with powerful laser cannons. This allows the V-wing to dogfight with other dogfighting classes, without the option to track targets from long range. This increased maneuverability allows the V-wing to survive longer than the standard bomber.

A side view of a V-Wing.

A V-Wing engages an enemy. 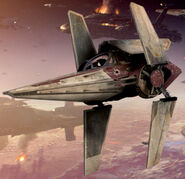