Vjun was a dark, smoggy, almost lifeless planet in the Vjun system. It was well known for its acid rainfalls and lack of plant life. It was the location of Bast Castle, this is where Darth Vader studied the Darkside of the Force.

The planet is only seen in Star Wars Battlefront: Elite Squadron, making it a non-canon planet.

The Empire at Vjun. 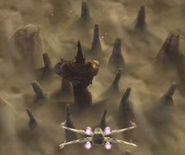 Duel on Vjun
Add a photo to this gallery
Retrieved from "https://battlefront.fandom.com/wiki/Vjun:_Bast_Castle?oldid=99003"
Community content is available under CC-BY-SA unless otherwise noted.