"The Vulture Droid is a capable multi-role starfighter. It utilizes great speed and firepower to make up for its lack of durability."
— In-game description

A Vulture Droid, also referred to as the Variable Geometry Self-Propelled Battle Droid, Mark I, is a Separatist starfighter in DICE's Star Wars Battlefront II and is the Fighter class for the Separatists.

"Skilled at both dogfighting and ground attacks, the adaptable Vulture Droid is a capable combatant in almost any situation."
— Website description

The Vulture Droid is more than capable of fulfilling multiple roles, such as dogfighting with other starfighters, attacking objectives, and conducting ground attacks against infantry.

The Afterburner ability grants a speed boost to the Vulture Droid, and can be used in order to break missile locks and to shake pursuers.

With the Laser Barrage ability, the Vulture Droid can unleash a devastating burst of high damage against anything unfortunate enough to be hit by all the blasts. This ability can also be used to damage objectives, or to harass enemy Hero Starfighters.

The Energy Torpedo can lock onto enemy starfighters and be used in a fire and forget manner, and can also be used to attack objectives and infantry. A well placed torpedo can deal tremendous damage to any enemy trooper or Hero. The Energy Torpedo can be dumbfired by double tapping the ability, while tapping it once and keeping sight of a target allows it to lock on.

Promotional image of the Vulture Droid. 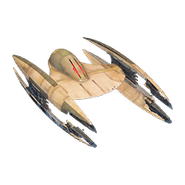 In-game icon of the Vulture Droid.