Wampas are large, humanoids that live in the ice caves of the planet Hoth. Wampas are to be found on the Hoth: Echo Base map in the original Star Wars: Battlefront II. Their attacks include a combination of punches and trampling which are very powerful. They are most effective at close range, and can move very fast. They can kill most infantry in 1-2 hits,so once they get close enough to you you're basically dead.

In Star Wars: Battlefront II, they are only playable in Hunt on Hoth.

A Wampa attacking a Rebel trooper 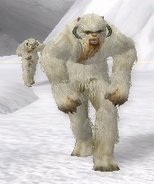 A Wampa, as seen in the films
Add a photo to this gallery

Retrieved from "https://battlefront.fandom.com/wiki/Wampa?oldid=87711"
Community content is available under CC-BY-SA unless otherwise noted.