Wings are the anatomical parts of a species that allow them to fly. In the Star Wars: Battlefront series, only the Geonosians are shown to have wings.

The purpose of wings is to have the unit fly. They are the equivalent of the jetpack used by the Jet Trooper. They act exactly the same minus their looks and may or may not appear on the unit when not flying.

The Geonosians are the only species with wings. In the in-game model, there are two pairs of wings and are actually a separate model apart from the Geonosian. When in use, the wings will flap rapidly in a vertical fashion. Since they are flapping very quickly, they don't need a very detailed design because it is hard to see them.  Nevertheless, the actual look of the flying wings are highly under-detailed, only having a couple shades of color. 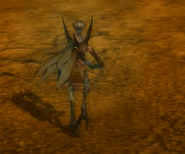 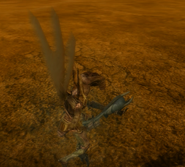 Add a photo to this gallery
Retrieved from "https://battlefront.fandom.com/wiki/Wings?oldid=87718"
Community content is available under CC-BY-SA unless otherwise noted.