"Wookiee Warriors are strong and loyal to the Rebel cause. Equipped with bowcasters, powerful traditional Wookiee weapons, they are impressive fighters. Their most destructive asset is the THERMAL IMPLODER."
— In-game description

The Wookiee Warrior is an Enforcer Reinforcement unit for the Galactic Republic and the Rebel Alliance in DICE's Star Wars Battlefront II.

The Wookiee Warrior is an Enforcer Reinforcement for the Galactic Republic and the Rebel Alliance. It is equipped with a Bowcaster as its primary weapon and three abilities. Its role in the Battlefront II metagame is to dish out large amounts of damage to enemy teams, ripping through infantry. While its Bowcaster is incredibly powerful, it is held back by a slower rate of fire - forcing it to often take cover and strategically attack enemies as opposed to advancing with brute force.

The Bowcaster makes the Wookiee Warrior capable of one-shot killing all of the main infantry classes, excluding the Heavy, should one of its bolts be hitting the head. However this advantage is limited to close range incursions as the weapon loses its effectiveness at range. When aiming, the horizontal blaster bolts on the Bowcaster will instead become vertical, making it more powerful as it will now perfectly spread across an enemy's hitbox. It is advised that the player aims as much as possible, although hip firing can be used to hit multiple foes at once or a single evasive enemies and is more mobile than aiming.

Its three abilities - Thermal Imploder, Overload, and Slam - are all capable of providing adequate offensive support for the Republic/Rebel Alliance. Due to its high damage and slow detonation time, the Thermal Imploder is useful for crowd control and weakening pursuing Villains. In particular, throwing the grenade into populated choke points is effective at eliminating massive amounts of enemies. Alternatively, dropping an Imploder behind you - so as to block the way for pursuers - can be a good way to quickly get into cover and heal. Its longer detonation time grants it a better range, as it will only begin its countdown when it has hit the ground and is more on-target thereby forcing long-range attackers to move while it detonates. Overload increases the number of blaster bolts on the Bowcaster but drastically decreases movement speed. It should be used to swiftly pick off infantry when the player is low on health or positioned in a densely populated zone. When aiming, it can notably two-shot kill most Villains should all of its bolts hit. Meanwhile, Slam deals damage and knocks opponents over. While they are getting up, they are vulnerable to firepower and other attacks.

The Wookiee Warrior's appearance is that of a Wookiee pigmented in various shades of brown. Its nose is stubby with large nostrils and its eyes are beady. The Wookiee itself is clad in the shoulder and body-based armor, notably resembling the Wookiee Tarfful from Revenge of the Sith. 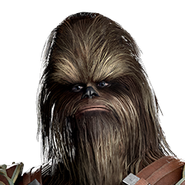 Original in-game icon for the Wookiee Warrior, found in the Beta files. 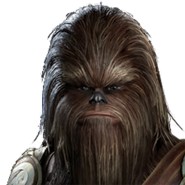 In-game icon for the Wookiee Warrior, prior to the Age of Rebellion Update. 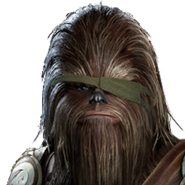 In-game icon for the Wookiee Warrior, after the Age of Rebellion Update. 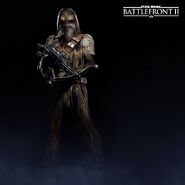 Promotional image of the Wookiee Warrior.

The Wookiee Warrior in the Collection inspect menu.

The Wookiee Warrior on the Survivalist Card

Wookiee Warrior on the Acquisition card.