watch 02:06
The Loop (Games)
Do you like this video?
Wookiees live on the planet of Kashyyyk. They are big hairy beasts and are known for their incredible strength. Their weapons are usually the Bowcaster and they use Thermal Detonators. They can build almost anything out of wood, and they helped Yoda escape from the Galactic Empire, during order 66. They were enslaved shortly after, by the Empire. The Wookiees are allied with the Galactic Republic and the Rebel Alliance.

In BF1
Add a photo to this gallery

In BF1
Add a photo to this gallery

An NPC Wookiee from Battlefront II. 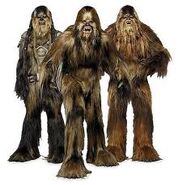 Some Wookiees.
Add a photo to this gallery

Retrieved from "https://battlefront.fandom.com/wiki/Wookiees?oldid=96523"
Community content is available under CC-BY-SA unless otherwise noted.