Yavin 4 is a jungle moon where the Rebel Alliance settled one of their first bases during the Galactic Civil War.

The temple featured in the map was built and used by the society that once lived on the planet, before it became deserted.

The map is large and relatively open, apart from all the trees. The undergrowth may seem to get in the way but can be fired and walked through. Vehicles and Turrets available include IFT-X, BARC Speeder, AAT, STAP, Alliance AAC-1, IFT-T, 74-Z Speeder Bike, and Yavin Turrets. 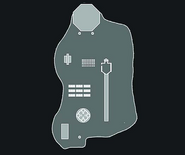 Temple located on Yavin 4. This Temple was also used by Rebels around 0 BBY.

Scout Trooper and Stormtroopers in combat.

Retrieved from "https://battlefront.fandom.com/wiki/Yavin_4:_Temple?oldid=97703"
Community content is available under CC-BY-SA unless otherwise noted.