The Yavin Turret, also known as the Yavin Tower Turret, is a standard Laser Turret based on top of a long pole on the Rebel side of the Yavin 4 map. They are exactly the same as normal laser turrets except they are elevated about 35 feet of the ground. While this is a great way to eliminate infantry from long-range, the thick foliage prevents these turrets from being truly useful. 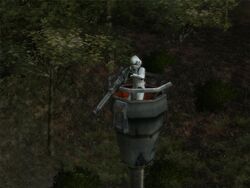 The user is fairly exposed when at the top; however he has concealment from the nearby foliage. In Battlefront I the turret has ammo and when depleted the turret must be destroyed and then repaired to replenish its ammo. Fortunately, the turret has one thousand shots before running out of ammo. In Battlefront II the turret no longer has ammo. Instead, it overheats when used for too long, causing a delay before firing can continue. These turrets can be used to a somewhat good effect on the Yavin 4 map, because it may take a while for your enemies to figure out where you're shooting from.

Retrieved from "https://battlefront.fandom.com/wiki/Yavin_Turret?oldid=87751"
Community content is available under CC-BY-SA unless otherwise noted.