"Yoda is an expert at turning defense into attack, using the Force to absorb blaster fire, heal his wounds, and protect him from harm while using his lightsaber to inflict damage."
— Star Wars Battlefront II website

Yoda is a Light Side Hero for the Galactic Republic and Rebel Alliance in DICE's Star Wars Battlefront II. His personal Jedi Interceptor is also playable in Starfighter Assault and Hero Starfighters.

Yoda is a formidable force on the battlefield. He is deceptively agile, despite his aged appearance and small stature. His abilities, combined with his natural Jedi jump and dodge, and make him virtually untouchable in the hands of a skilled player. His small nature also makes him an easy hero to use as an ambush. His lightsaber can be turned off as of the Hero Starfighters Update (G on PC, Square on PS4, X on Xbox), and his stature allows him to hide in tall grass, bushes, or behind objects that other heroes could not. Yoda is somewhat hard to control for less experienced players. His lightsaber attacks are quite extravagant, and may miss their target if not aimed properly. However, his speed and agility rivals that of Darth Maul, allowing him to hold his own in battle.

Yoda is best used as a support hero, thanks to his Unleash and Presence abilities. On the surface, the former ability acts as a weaker version of Luke Skywalker's Push or Obi-Wan Kenobi's All-Out Push but in reality its capabilities extend much further beyond this. Instead of deflecting blaster fire with his block, Yoda absorbs it and a small blue outline will start circling the Unleash icon. This power allows him to charge up the ability, increasing its damage and range. Meanwhile, Presence boosts his and allies' health pools for a short period of time, acting as a lifesaving tool in near-death situations. To top his ability arsenal off, Dash Attack causes Yoda to leap forward with his lightsaber, similar to Luke's Rush ability and Darth Maul's Spin Attack. Dash Attack has two charges and that number can even be upgraded to 3 with the Agility Star Card. That said, it is not powerful enough on its own to kill enemy troopers, unless they have already taken damage. Yoda's Dash Attack goes through Lightsaber blocks. Which can be used to apply constant pressure and to finish off weak heroes.

* Yoda does not deflect blaster bolts or attacks, instead he absorbs them with his block to charge up the damage output of his Unleash ability.

"Dodge is most effective at avoiding lightsaber attacks and opening space between you and the attacker."
— Second hint
"Heroes can only block attacks from the front. Try to position around them and hit them from behind to be effective."
— Third hint
"Each time a blocking hero deflects damage or swings their lightsaber, they lose stamina. When out of stamina, heroes are unable to deflect or trigger a closing strike."
— Fourth hint
"Heroes have strengths and weaknesses. Hone your skills by playing Arcade."
— Fifth hint
"Use Star Cards to ensure your hero experience is personally tailored."
— Sixth hint
"Heroes will only regenerate a limited amount of health after taking damage."
— Seventh hint

"Yoda can absorb blaster fire to charge Unleash, making it more effective."
— First hint
"Yoda’s Presence ability increases the health of nearby allies as well as himself."
— Second hint
"When playing as Yoda, try to use his small size to your advantage to ambush enemies."
— Third hint

Incorrect area of effect of Presence[]

Yoda's Presence ability has a bug introduced in late 2019 where, when activated, its area of effect isn't where it's supposed to be. Previously, and as intended, Yoda's Presence would affect allies around him, in a circular area centered on Yoda himself. However, since the bug was introduced, only the first time Yoda uses the ability it behaves that way. All following uses of the ability will center the effect elsewhere, not where Yoda is located during activation.

It actually centers the effect in the spot where Yoda was when his Presence ability last entered cooldown. Dying and respawning fixes the bug, but upon using Presence once again the bug is back. 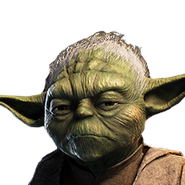 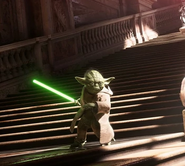