Yoda's Actis-class light interceptor is very maneuverable and can dish out persistent firepower. The fire rate is very high, but that means it will overheat faster. However, there's no missile weapon, so mind that in battle. Its Ion Pulse ability will disable nearby enemy fighters, making them easier targets. It is one of the two Jedi hero starfighters - the other being Luke Skywalker's T-65 X-wing.  The paint is in green, and a R2 brand astromech can be seen on the left wing.

Afterburner: Gives the starfighter a temporary speed boost and breaks enemy missile lock. The AFTERBURNER can be cancelled after a short time.

Ion pulse: Emits a high-reaching ion pulse that slows down and prevents the use of fighter abilities for a short period.

Grand master´s concentration: You cannot lose your current target and the time to gain a missile lock is reduced. Additionally, the target is revealed and receives extra damage.

The interior of the interceptor's cockpit. 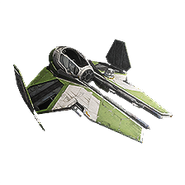 In-game icon for the Yoda's Interceptor.
Community content is available under CC-BY-SA unless otherwise noted.
Advertisement