Yoda is a powerful Jedi Master who is a even match for the powerful lord of the Sith, Darth Sidious. Jedi Master Yoda goes into hiding after the end of the Clone Wars. After Obi-Wan dies, Yoda is the only Jedi Master left, and it is up to him to train Luke Skywalker to battle with Darth Vader and The Emperor. In the game, Yoda is hard to target, but his force attacks could use some improving. He is also difficult to control, with a great deal of jumping and twirling about that tends to send him in unexpected directions. He can do 3 strikes at one time, although they are very slow. Tall grass is a distinct problem. He fights for the Galactic Republic.

Yoda in the Films.

A Stormtrooper vs Yoda. 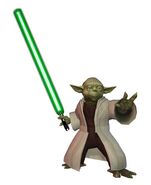 Retrieved from "https://battlefront.fandom.com/wiki/Yoda/Original?oldid=91719"
Community content is available under CC-BY-SA unless otherwise noted.